When you load up Trials: Rising for the very first time, there’s no cut scene, no credits, nothing – it goes straight from the title screen to the very first course, where your silent, indestructible biker sits atop a primed motorcycle, waiting on your command before hurtling himself (or herself) through an Evel Knievel-like course.

Sounds fun, right? Trials: Rising is full of those jaw-dropping moments, where you’ll be soaring over trains, out-running wrecking balls, and jumping through movie sets in no time. 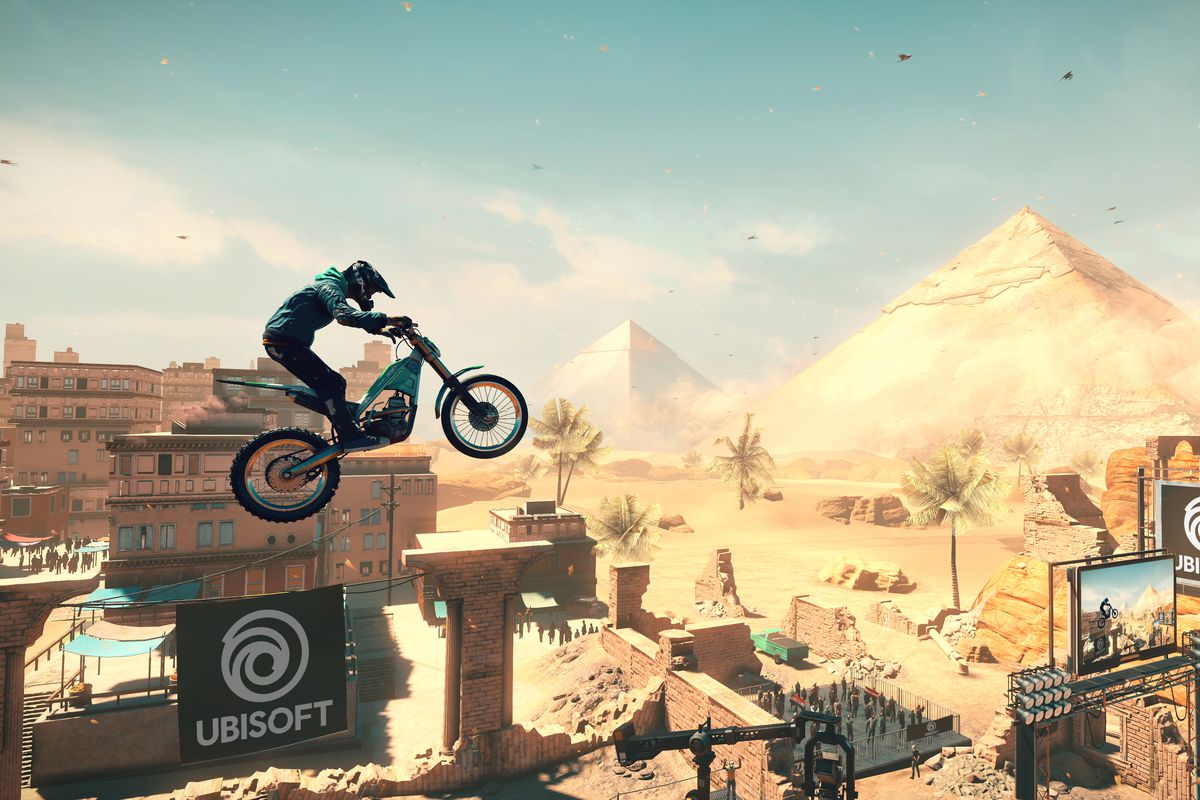 The best part of this game lies in how amazingly simple it is: you will mostly be using the two triggers (L2 & R2 on the PS4) and the control stick – R2 powers the gas to your cycle, L2 the brake, and the control stick manages the way your character leans while he or she is in the air. Truthfully, it’s pretty easy to get the hang of – the difficulty lies in mastering it. Landing a perfect jump evokes a joy worthy of a fist pump – only, don’t take your hands off the controller, lest you screw up the next part of the course. Don’t worry, though: if you mess it up, you have the option of either continuing from one of the level’s many checkpoints with a five-second penalty (by pressing circle on the PS4) or simply restarting the level from the beginning entirely (by pressing the left part of the touch pad on the controller).

As you might guess, the game largely revolves around completing courses in time trials – because there is only room for one motorcycle on each track, Trials wisely makes you race against ghosts (think the shadow racers in Mario Kart). It’s a great way to still feel like you’re competing against someone else – because I played the pre-release version, I believe many of the ‘ghosts’ are simply NPCs that the programmers added in, but there were some actual gamertag-labeled ghosts sprinkled in here and there. 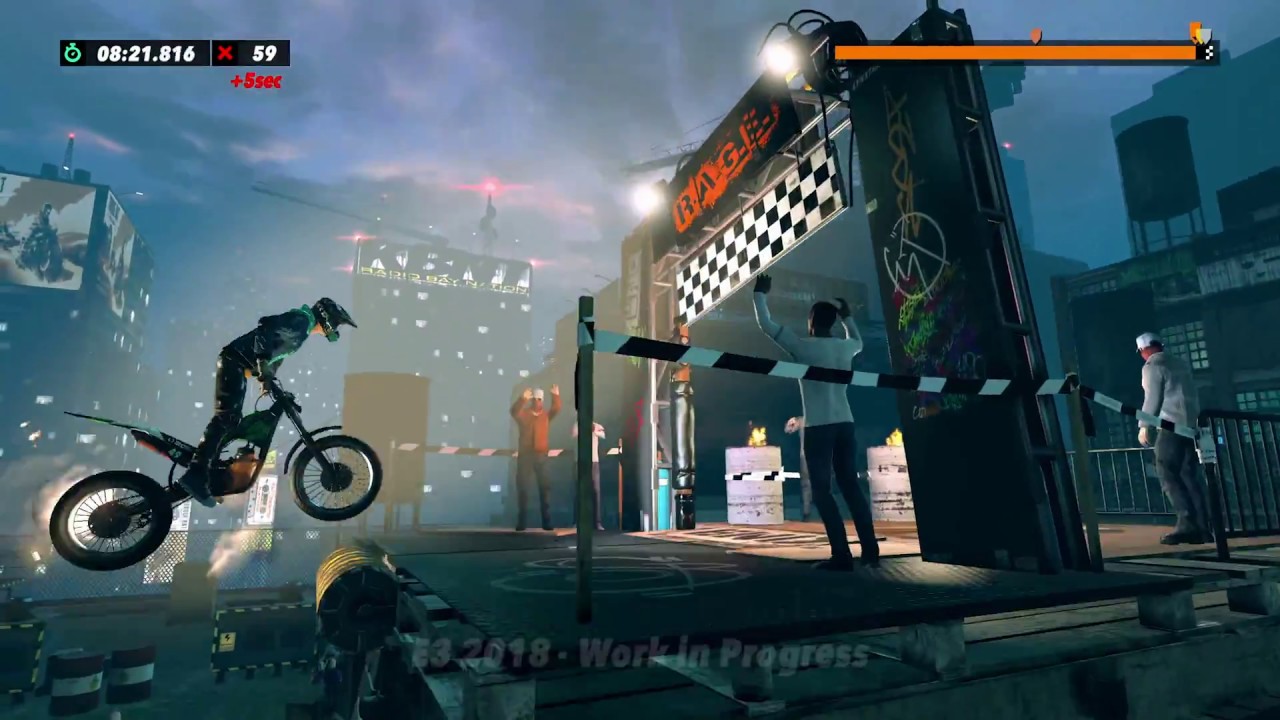 There’s no real story to speak of, as it’s essentially an excuse for the game to shuttle you from one place to another. Once you beat the beginner-level challenges in North America, it opens up the rest of the world. I was somewhat taken aback – after beating the first set of races, it seemed as though there’d be not many more to accomplish, but in truth there are over 100 potential races to play in ever corner of the globe.

Another ludicrously entertaining aspect of the game are the Skill Trials – I won’t spoil them because part of the fun is unlocking them for yourself, but the initial offering involves slamming your bike into an explosive barrel to see how far you can toss your biker, ragdoll-style, by having his body land on more explosive barrels. It kind of reminds me of the Home Run Contest from Super Smash Bros., if you were partial to that sort of thing. 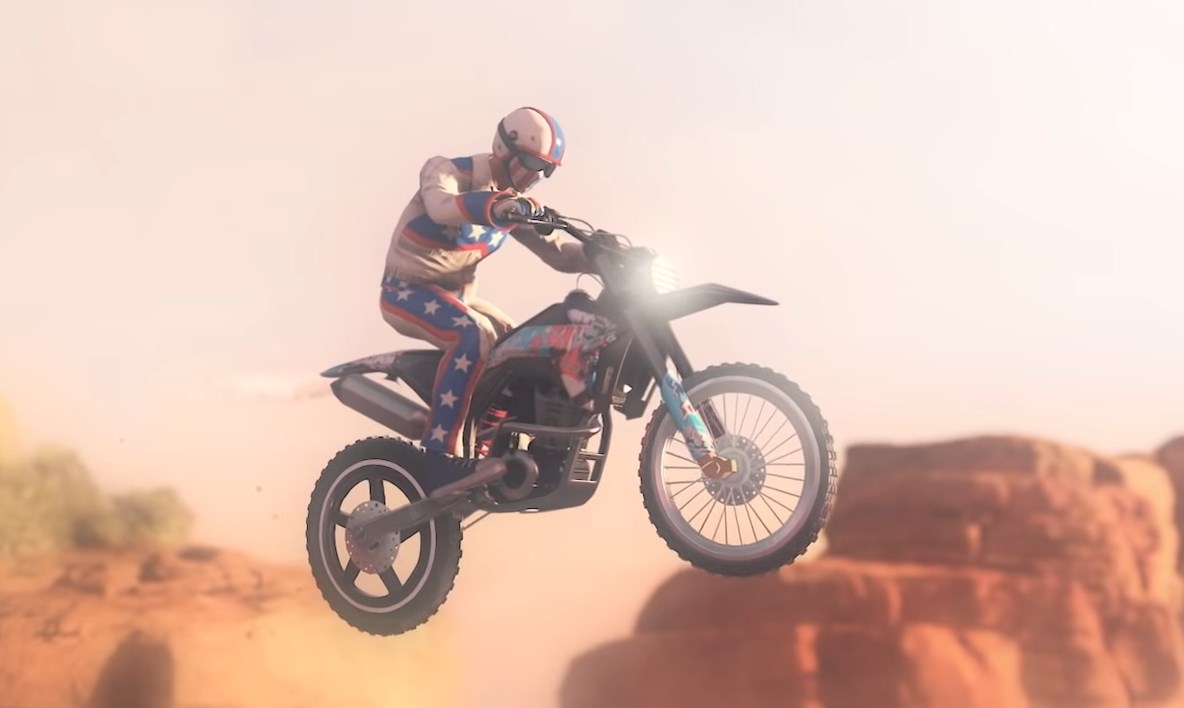 If you’re into playing a bit of dress-up with your character, as I am, then Trials also provides on that front as well. After every race, depending on your timed finish, you’re rewarded with a bronze, silver, or gold medal, each of which come with a in-game currency (gears) prize. After every level up, you’re also rewarded with loot boxes, which provide you with either more gears, stickers (which can be applied to either clothing or to bling out your ride), or new parts for the bikes themselves. It’s a fun way to continually look forward to playing, although I admit that getting only stickers from my fifth straight loot box is a bit discouraging. On the bright side, you can also use your gears to straight up purchase things you want, which combats the potential monotony of playing the loot box lottery.

Visually, it’s nice to look at, though it does not seem to take advantage of the higher powered set-ups. There are no problems with the game itself, whether it’s a game breaking bug or frame-rate/lag issues, though the cartoonish-style and dated rock music (seriously, it sounds like they went to a royalty-free site and picked out the least offensive rock songs) remind me of a game from 2007. Combined with the off-beat humour, Trials: Rising is somewhat reminiscent of the Tony Hawk’s Pro Skater series, so you can take that as either a positive or a negative.

As I said, this game is devilishly simple. Give some power to the gas and you’re on your way – that’s the one sentence review of this game. It’s the journey that matters, and the pure thrill that comes with completing a course in a single try is rewarding in a way that many other games are not. It might be a bit short (probably 10-12 hours to get the minimum requirement to advance in almost every race), but many more hours lie ahead in going for gold. Don’t forget your helmet!

Ubisoft provided Okay, Cool with a code for the game on PS4 for review purposes.

One thought on “Trials: Rising Is Weird, Off-Beat Fun”