Over the years, console exclusives have been what companies such as Nintendo, Sony, and Microsoft dangled in front of gamers, enticing us to pick one of them over another. If you wanted to visit the colourful worlds of Mario, Zelda, and Metroid, Nintendo was your only respite. Want to embody the Master Chief as he takes down an alien battlecruiser? The Xbox is for you, my friend. Did you have a desire to guide Solid Snake through a treacherous enemy compound? The original PlayStation it was. Each and every one of the major consoles had something to offer gamers, and those choices have only grown more numerous.

While each of the consoles have fun games available only on certain platforms, Sony has consistently delivered nuanced and truly beautiful games throughout its lifetime, and the hits just keep on coming. Which of them, though, are the absolute best? Which are the ones that are worth the price of a PlayStation 4 alone? If you’ve ever wondered what the answer to that question is, or if you’re on the fence about buying a PS4 (as I was back in January of 2017), let me help you out.

#5: The Last of Us Remastered

Yes, this game isn’t a PS4 exclusive – because it was originally released for the PS3. The core gameplay is still the same, with Joel and Ellie solving puzzles and relying on one another as they attempt to survive the new reality they live in after a fungal outbreak wipes out much of humanity. If it sounds like just another zombie trope that has become so popular in the media these days, fret not – it is one of the more hauntingly beautiful games, both visually and narratively, available today.

If you’re into trial and error, then the punishing world of Bloodborne is for you. It is an unyielding, brutally difficult game – one that demands patience and endurance, not to mention a quick eye and some good reflexes. However, it’s a gaming experience that, when you prevail for the first time, brings such heights of joy that you truly feel as though you earned it… even if an even more difficult fight lurks around the next corner. Fans of the Dark Souls series will be right at home here. 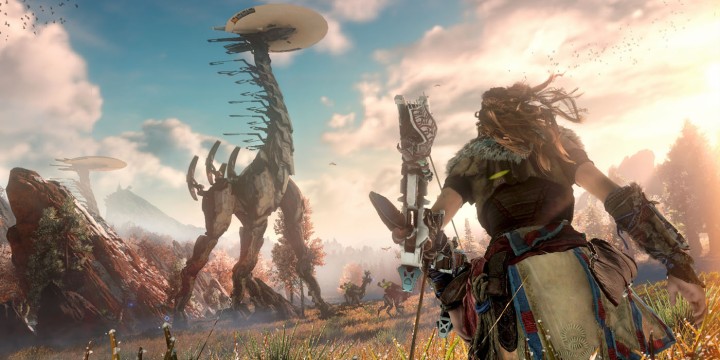 Set in Earth’s distant future, Horizon: Zero Dawn sees you take on the role of Aloy, a young woman determined to not only discover how her ancestors (read: us) destroyed the world, but to find out how to fix it. It’s an amazingly wonderful combination, where we see primitive tribes meet advanced robotic dinosaur-era creatures, all dropped into a fully interactive open-world map. Whether Aloy is brokering a peace treaty between two feuding families, or taking down a T-Rex-shaped robot, this first entry in the series isn’t just one of the best PS4 games – it’s one of the generation’s best games, period.

The God of War series started back in 2005, with the initial installment released for the PlayStation 2. The hack and slash style of Kratos and his dual blades became incredibly popular, as the Spartan butchered his way to the top of Mount Olympus and back. In 2018, Kratos has been reborn, returning as a man who had sworn to leave his old life behind, only to find that some things are easier said than done. You can read our more in-depth review of God of War, but the game combines beautiful, snow-covered visuals with amazingly choreographed, savage fights between Kratos and other powered beings – and that’s just in the first 15 minutes.

Playing through Uncharted 4 is a singular video gaming experience. It’s certainly made better by playing through the first three games, certainly – what series of games wouldn’t be – but whether you’re a seasoned veteran, or just wanted to dive right in, Uncharted 4 has something to offer everyone. Nolan North returns to voice the rascally protagonist, Nathan Drake, and his stalwart companion Sully is along for the ride as well, as the globetrotters hop from locale to gorgeous locale.

The jaw-dropping action sequences make you feel as though you are an intimate and crucial piece of the world’s most expensive action movie, and even simply moving around the meticulously built levels feel as though Indiana Jones has been updated for 2018. Developer Naughty Dog really squeezes everything out of the PS4 for Drake’s final hurrah, and they make it count in every possible way.

If you have a PS4, and you don’t have one of these five games, you’re missing out. Each of those titles are special in their own way, and on top of everything they already bring to the table, they’re also exceptional reminders of why you may have fallen in love with video games to begin with.

The best part is that the exclusives don’t stop with this list. Detroit: Become Human, a choose-your-own-adventure game where you play as a crime-solving android in the near future, is released on May 25. Meanwhile, Spider-Man (the latest tale of Marvel’s famous web-slinger) will be available on September 7. Heck, if you’re a baseball fan, the only real place to get a non-cartoony, fully-licensed experience is with the PlayStation series MLB: The Show – the most recent version, MLB 18, is in stores now. When you’re able to see a bead of sweat on a pitcher’s forehead, his fingers tightening around the stitches on his four-seam fastball, and aren’t able to tell if it’s a video game or not, you’re probably doing something right.

If you’re like me, and you’ve not been able to experience what the PlayStation 4 has had to offer until recently, then don’t wait any longer. It’s a great console, and pairs well with either the Switch or Xbox One (or both, if you’re able), and it stands on its own two feet just as well.

Simply put: the PS4 is pure, unadulterated fun, with something to offer every type of gamer. Who doesn’t want that?

You can find Shoaib on Twitter at @SNSAlli if you are at all compelled to watch him tweet about sports or movies. Gaming too, but that sort of goes without saying since he wrote the article you just read, right?

One thought on “Console Exclusivity is All Sony: 5 Must-Have PS4 Games”