What do you do when the Boogeyman comes for you? I’ve been fortunate enough not to find out over the course of my life, but I’d imagine the sight isn’t a pretty one.

John Wick is the boogeyman personified, baba yaga, who comes for his enemies swiftly and mercilessly. He sits, feared and respected at the top of an assassin underworld, one that runs on a strict set of codes and rules. Everything, including arms dealers, information brokers, car mechanics, churches, libraries – seemingly every aspect of life in this universe is in some fashion related to this underworld – all run by the mysterious High Table. Everything, essentially, is ‘under the Table’.

John Wick: Chapter 2 ended with Mr. Wick (Keanu Reeves, as stoic and tight-lipped as ever) killing his adversary on the neutral grounds of the New York Continental, one of a series of hotels where no business can be conducted. Wick broke the most sacred of rules, and as a result was banned from all services, complete with a $14 million bounty on his head.

It’s here that John Wick: Chapter 3 returns to his escapades, as he makes a mad dash to escape the confines of New York City, where every assassin with a knife or a gun is trying to finish him off. He eventually finds his way across the ocean, where he meets up with old friend Sophia, who helps him find some redemption/revenge (with Wick, it’s seemingly the same thing sometimes).

Sophia, played by the ageless Halle Berry, is one of the most kickass characters to make it to the screen in some time. Until now, the series has been reluctant to put anyone on the same pedestal as Wick himself, but Sophia – someone who shares a personal connection to John in a past life – is perhaps the only one to come close. She has some truly amazing action scenes, ones that rival any of the top sequences from the previous outings. Give me a Sophia standalone movie (prequel or otherwise), and I’m set. Even if that doesn’t happen, we’re already getting a series based on the Continental hotels (check this out for a little more info), so here’s hoping Sophia makes an appearance.

Ian McShane, Lance Reddick, and Laurence Fishburne all return to reprise their roles with the usual aplomb, and it’s nice that Reddick’s concierge Charon is given a little more to do in this one. Mark Dacascos joins the proceedings as a fellow assassin, who proves to be not only fun to watch, but also genuinely funny, as well. Honourable mention goes to Yayan Ruhian and Cecep Arif Rahman, two of the more familiar faces from The Raid 2, one of the better action movies of the last several years (funnily enough, both the first John Wick and The Raid 2 were released in 2014).

The action is tremendous as usual and has evolved to be as creative as possible. There’s a fight in a library (complete with a “shhh”), in a knife shop, in cars, on streets, in factories, and (as seen in the trailer as well as below) on horseback. It’s truly tremendous fun, and director/former stunt coordinator Chad Stahelski continues to showcase his background with the increasingly complicated stuntwork. 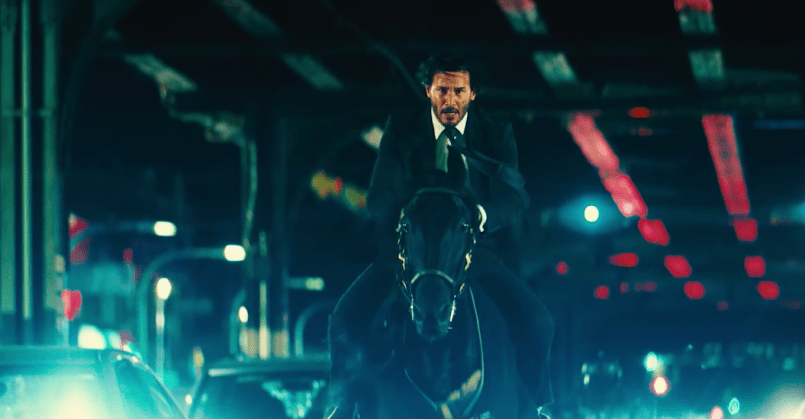 John Wick: Chapter 3 is the best entry in the series thus far: it continues to build on the established lore while expanding on John Wick’s own personal backstory, it increases the stakes via the action sequences, and as expected, sets itself up for a potential fourth installment. While it may not hit the highs of the all-time action movie greats, it comes pretty darn close, and any viewer who enjoys action will love Mr. Wick’s third outing.