Surprises are hard to come by in gaming today. A few bosses into Mechstermination Force, I expected just a typical boss rush game. Then the magnet gloves were introduced allowing me to climb the giant killer robot enemies, and by the end of the fifth mission, I was certain I understood what exactly I was getting into. But in the very next level, I was literally inside a giant mech and I realized that it was impossible to try and predict what challenges were waiting for me.

From Bertil Hörberg, the creator of the cult hit side-scrolling action platformer Gunman Clive, Mechstermination Force is a boss rush side-scrolling shooter in which the mech bosses act as the level themselves. Think Cuphead meats Shadow of the Colossus. There is no platforming buildup before a boss encounter. Each mission pits the player against massive mechs with multiple stages that can involve climbing the mech to reach weak spots. Part bullet hell, part platformer, part puzzle game; Mechstermination is unlike any game I have played. The feeling after besting a mech that once seemed impossible is one of the best in gaming. Likewise, falling just one hit short can be equally gut-wrenching.

The art style shines when you see the creative designs of the 14 mechs. Whether in 1080p docked or in 720p in handheld mode, the use of colour is for more than just visual flair. Yellow cores and projectiles can be destroyed with any gun, while red cores will need to be hit with a melee attack and red projectiles must be avoided. Many bosses can be climbed using the magnet, but only after you destroy their colourful exterior and expose the metal frame underneath. This consistency gives the game a certain language that carries over from boss to boss even if the design and attack patterns can vary so greatly.

The sense of scale is truly impressive. Run far enough away from your target, and the camera zooms out to always highlight the massive boss. Even at a distance, many of your weapons will travel across the level adding a layer of strategy to how up close and personal you want to tackle each fight. Occasionally the fight carries over into the mech itself, and the camera will adapt by zooming in giving these moments the attention to detail they deserve. Less impressive is the music. While the soundtrack magnifies the frantic battles, the score can turn frustratingly repetitive when you are banging your head against a wall trying to beat one the trickier levels.

Breaking parts off of mechs and completing levels will earn you cash which can be spent on additional hearts or new guns. There are six total weapons, with each new one becoming increasingly expensive, but they are far from balanced. In the final stretch of the game, the player will likely settle on a couple favourites and rotate depending on the situation. Considering how varied the boss encounters are, it would have been awesome to see the entire arsenal have practical use throughout the game. Despite that, the consistent flow of cash even in losing efforts will keep struggling players engaged. This adds a light RPG element as players grind their way to more health or a new shiny weapon to best a boss that may seem impossible at first. 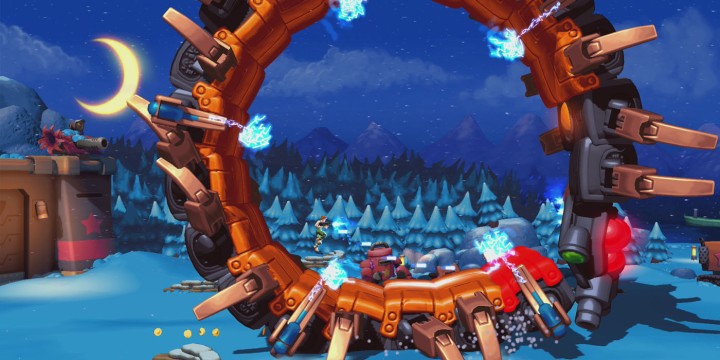 It took me just over six hours to complete all 14 missions, and that includes my 146 deaths. But my cumulative clear time was just over 45 minutes, so a far more skilled player could possibly get to the final credits in under a couple hours. There are four playable characters, but there is no difference between each aside from the character model. There is a “Virtual Training Center” that allows you to replay previous levels to try and beat your time or score an elusive “No Damage”. Clear times are tracked separately for 2 player co-op, so diehard completionists can stretch their playtime by chasing a 3-star rank solo and with a friend. Online co-op would be an awesome addition, but Mechstermination doesn’t even have leaderboards. The replay value takes a hit when it is impossible to compare your best clear times with other players.

At $15 CAD ($12 USD), there is a lot to love about Mechstermination Force. For those who love a challenge and either can’t wait for Cuphead to release on Switch or looking for something new and equally rewarding, the genuine surprise each new mech brings is well worth the price of admission.

Mechstermination Force arrives for Nintendo Switch on April 4, 2019. Okay, Cool was provided with a copy of the game by Plan of Attack for review purposes.

You can find Mark on Twitter at @MarkStaniusz if you have any more questions about this game or any others. He’s well-versed in games, as it turns out.