With the core roster of characters now locked in for Super Smash Bros. Ultimate, the fan base has turned its attention to the forthcoming downloadable content for the game. Nintendo has confirmed that five paid-for downloadable characters will be joining the final roster before 2019 has concluded, but the community appears rather divided on just who or what will appear within this appropriately named Fighters Pass.

Of course, these five will arrive following the debut of Ultimate‘s wacky newcomer Piranha Plant in February 2019, which is appearing as part of a limited bonus offer that will provide early adopters of the game with the character for free. While the reality of these new challengers means that other first-party fighters will almost certainly be among the five chosen, the premise of speculating on more third-party protagonists joining the fray is something all too tantalizing to pass up.

Without further ado, here is my take on the five most likely non-Nintendo candidates that may appear as DLC in Super Smash Bros. Ultimate. 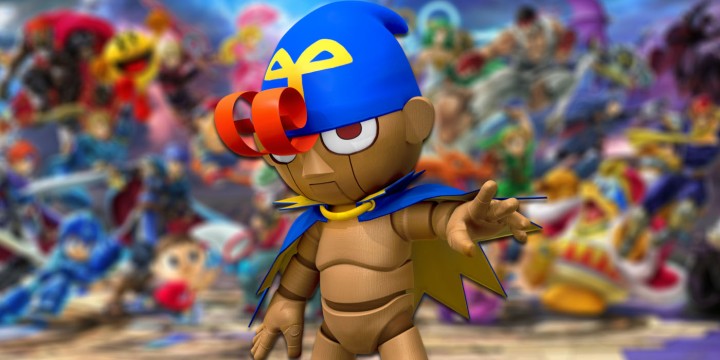 Hailing from the one-off, SNES classic Super Mario RPG, Geno has been one of the longest running fan-favourites for inclusion in Super Smash Bros. for quite some time. Despite many thinking the doll-come-to-life was a frontrunner for Ultimate, the character never did earn a spot on the roster.

Given that Square Enix technically owns the hero (despite him only ever appearing in two Super Mario games and as a Mii costume in Smash Bros. for Wii U/3DS), it’s possible that initial contract negotiations that renewed Cloud’s presence in Ultimate held up plans for development of the fighter. Still, the character has shown up as a collectible Spirit in Ultimate, which means that the fighter exists within that world’s canon so he may still have his day yet.

Rare Ware’s bear and bird duo were once synonymous with Nintendo during the company’s run with the Nintendo 64, but this was before the company sold off the studio to Microsoft – trading the rights to Banjo-Kazooie for all Rare-owned Donkey Kong characters. Keeping that in mind, Banjo and Kazooie appear to be more of a pipe dream, but there has been movement between Nintendo and Microsoft that suggests the two, at the very least, have a very good relationship.

First and foremost, the acquisition of Rare hasn’t stopped Microsoft titles from appearing on Nintendo handhelds in the past, with the likes of Banjo-Kazooie and Viva Piñata appearing on Game Boy Advance and DS, respectively. Heck, Microsoft’s Rare was even contracted to personally oversee and develop Diddy Kong Racing DS, which is a rather bizarre move in and of itself.

Throw in comments from Xbox head Phil Spencer about him being okay with Banjo appearing as downloadable content in Smash Bros. and rumours that Banjo-Kazooie may be appearing alongside 29 other titles as part of a Nintendo 64 Mini/Classic console, and it’s apparent that there’s still hope yet for this long-awaited homecoming.

You know what’s interesting about this character? His name is Crono, despite originating from a game called Chrono Trigger for the SNES. You see, his name is missing the letter “h” that’s found in the title, which I think is incredibly odd and noteworthy to the point of needing to occupy two sentences in this intro. Still, this icon is the main protagonist in what many gamers identify as the greatest JRPG title ever made, so there is unquestionably something alluring about the character and his legacy with Nintendo in particular.

Currently there are reports from one industry insider that a Square Enix character will be the first of the five DLC fighters planned for Super Smash Bros. Ultimate. Having said that, the inclusion of the fighter is just speculation on my part – and the hero could easily be ousted by a Dragon Quest character, Sora from Kingdom Hearts (despite being owned by Disney), or even the aforementioned Geno – but Crono would fit the bill perfectly as a downloadable combatant.

Plus he’s designed by Akira Toriyama, who also designed Dragon Ball‘s Goku. Perhaps that could satiate gamers hoping to see the Super Saiyan added to the roster.

I can already hear the clattering of keyboards as Smash fans begin typing up responses to how Steve from Minecraft should never be a playable fighter when there are so many other “more deserving” mascots still lacking any representation in Ultimate. I’m not here to tell you you’re wrong, because that’s just, like, your opinion, man. However, I am here and hopeful that you understood that reference to The Big Labowski and haven’t jumped to the conclusion that I’ve been exclusionary by throwing out the word “man,” but I digress.

The same source ousting a Square Enix presence with a DLC spot claims that Minecraft content is going to be a thing in Ultimate. Oddly enough, nothing has emerged in the guise of a Spirit, Assist Trophy, or stage, which would imply that Minecraft is part of the game’s DLC plans. Plus that whole “Survive Together” commercial featuring Nintendo Switch and Xbox players teaming up online, the Super Mario crossover pack in the Switch/Wii U versions of Minecraft, and the recent Creeper-themed New Nintendo 2DS XL are all pretty good indications that the property is a significant player in the eyes of Nintendo’s higher-ups.

As a result, Steve may very well be having his day sooner than later. Plus, if you’re negative about this possibility then it’s important to keep in mind that Microsoft owns Minecraft, and if discussions opened up about Steve then talks may have also occurred for the inclusion of a certain bear and bird pairing.

Out of all the other characters on this list, Resident Evil‘s Leon probably appears to be the longest stretch. The blonde, zombie-killing operative comes from a pretty dark and violent background that doesn’t necessarily fit the family-friendly themes of Smash Bros. Ultimate, but the same could be said for both Solid Snake and Bayonetta. Besides, Leon in particular has a lot of history with Nintendo thanks to what many still consider to be the best RE game ever made, Resident Evil 4, and its exclusive debut on the Nintendo Gamecube.

Leon also happens to be returning to relevancy with an upcoming appearance in the remake of Resident Evil 2 next year, and when considering that Capcom is already onboard in Smash with three playable characters (Mega Man, Ryu, and Ken) then this character option has to be firmly on the table. Of course, there are far from any guarantees that it will happen, but Resident Evil is a huge franchise that’s still oddly absent from Nintendo’s crossover-focused fight title.

Besides, the pure terror that would be associated with El Gigante appearing on-screen as Leon’s Final Smash is almost too good to pass up.

You can actually find Riley on the social media website Twitter dot com under the guise of @TheRileyLittle if you ever want to chat about Super Smash Bros. Ultimate or just video games in general.