Pairing dinosaurs with a park simulator isn’t a new concept, with Zoo Tycoon spearheading such a premise in its expansions on PC and Jurassic Park III: Park Builder arriving on the Game Boy Advance back in 2001. Still, it’s bizarre that the stars have taken this long to align for a proper theme park sim involving the Universal-owned property, but Jurassic World Evolution finally gives eager dino aficionados across PC, PlayStation 4, and Xbox One the option to build their own pre-historic death trap – which the game ensures is the case more often than not.

Players will be handed the reins to create parks on five different islands called Las Cinco Muetres (The Five Deaths). The challenge varies based on the island players find themselves on, but they get progressively more difficult as users unlock new islands. Of course, where there’s challenge there’s reward as generating profits and balancing the safety of guests isn’t as easy as it may initially sound.

Ensuring the happiness of the dinosaurs in captivity is paramount for anyone playing, because allowing them to enter a state of unavoidable rage means it’s immediately going to take a stab at trying to escape. This unsurprisingly plunges your park into a state of chaos as staff – or the player themselves, if they feel so obligated – try to tranquilize the newly liberated “assets” and return them to their pens in an attempt to limit the amount of tourist-based meals for the carnivorous variants of the beasts.

The repercussions of allowing hungry dinosaurs to roam free amongst a human populace have already been explained by the films, so there’s not much of a need to recap it. Unlike the movies, however, ensuring that the dinosaurs remain locked up comes down to making certain that they’re happy within their cages by monitoring several bars and their respective measurements tied to social needs, food and water, etc..

This isn’t as easy a task as some may believe, however.

Even the slightest issue with the once-extinct animal’s environment will cause it to enter an escape mode of sorts, which signals trouble and adds to the challenge. It can be annoying at times, but the act itself undeniably adds excitement to gaming sessions. Better yet it mirrors the film franchise itself in doing so, as Evolution wants players to actively juggle the needs of the dinosaurs with the necessity of profitability.

There’s also a mission structure that is setup between three in-game factions (read: Jurassic World departments): Research; Entertainment; and Security. It’s clear that each branch has its own agenda right from the get-go and this can lead to groups becoming agitated when contracts from rivals are picked up – even if the negatives don’t make much sense. For example, researching a new type of dinosaur should boost all of the groups, but that’s just not the case.

Building favour and reaching new tiers with each faction earns you, the player, new buildings and such to implement into your park (as well as truckloads of money) so it’s a necessary balance to maintain. Those running low on cash when constructing a park will have to take several tasks in order to ensure that they are able to keep the park operating, but this stop-and-go design can put a hamper on the experience at times. These low points make sessions drag, forcing players to sit and wait to accumulate money to do anything.

This is, truthfully, the result of poor financial planning on my part, but it would be nice if there wasn’t a one-minute freeze or a three-contract limit in requesting and holding contracts, respectively. Additional tasks could help to bail users out a little more quickly in these instances and would help keep players building their park in this…well, park builder.

Outside of the actual park building, those booting up the title will immediately recognize the voice of Jeff Goldblum who’s reprising his role as Doctor Ian Malcolm from the original pair of Jurassic Park films; which just so happens to be something that he also did in Jurassic World: Fallen Kingdom. Bryce Dallas Howard and BD Wong also return to their roles as Claire Dearing and Dr. Henry Wu, much to the delight of fans, but for some reason Chris Pratt doesn’t join the cast to as the series’ current face, Owen Grady.

Instead, another actor takes on the role of Grady, which is almost bizarre to hear given how far off the mark he is. This is a nit-picking qualm to be sure, but it stands out amongst the rest of the all-star Jurassic cast. 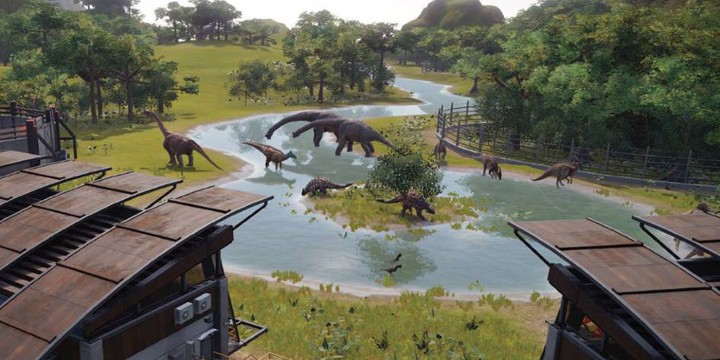 Jurassic World Evolution isn’t a perfect experience, but it’s an amazing licensed game – which has been something of a rarity in the past. The satisfaction derived from creating and maintaining a functioning park is only enhanced by the visuals featured within the title. It’s easy to become immersed in the park that you’re building because the dinosaurs look magnificent, even when players are bogged down with no money and bad tasks.

I mean, it’s also entertaining to watch a tyrannosaurus rex gobble up guests before taking on a third-person view to personally tranquilize the hostile creature, but that may just be me.

Jurassic World Evolution is currently available for download on PC, PlayStation 4, and Xbox One. Okay, Cool was provided with a download code for the game on Xbox One for review purposes.

If you’re at all interested in following Riley on Twitter then you can find him at @TheRileyLittle. His own mother doesn’t even follow him on the platform so we’re sure he’d appreciate it.