This Nintendo Switch exclusive is hitting the court after what many fans considered to be a lacklustre entry in the form of Mario Tennis: Ultra Smash on the Wii U. In that instance the peanut butter analogy didn’t quite hold up, but the hollow experience provided by that game appears to have acted as a base for Aces and the medley of content that now comes included.

A few major additions are present and accounted for this time around, with the most obvious, attention-grabbing feature being none other than Adventure Mode. Fans of the portable Mario Tennis outings on Game Boy Color and Game Boy Advance may be familiar with such a premise, and those same fans will be even more familiar with the RPG mechanics of those games. That’s right, the ability to grind for higher levels, earn new equipment, and increase your stats in a solo-player setting have returned, but they aren’t as in-depth as some tennis aficionados may have hoped.

You see, the length of the campaign is quite short. This means that everything is designed to play out simply and quickly; this is presumably why Mario is the only central character available to play as, aside from one predetermined sub-in that’s available at the penultimate endeavour. As a result, the final experience doesn’t have the opportunity to manifest itself as a true role-playing game. Yes, stats increase and racquets can be won to enhance play, but the difficulty sharply rises to meet Mario’s increased stats in a way that makes it feel like players are consistently breaking even.

That doesn’t mean that Adventure Mode isn’t engaging, however, as the challenges present throughout clicked with me in ways that Mario Tennis Aces‘ other modes did not. Various challenges, matches, rally sessions, and boss fights are some of the most white-knuckle experiences currently available on Switch – bringing with them some genuine challenges that will undoubtedly make a few players rage quit before they inevitably pick it back up again. It’s a beautiful give and take in that respect.

After wrapping up the story, players can dive into the Tournament Mode which allows them to go through a more traditional bracket to earn championships and trophies. It’s a fun mode that occupies a little time, but the bread and butter after putting to bed the core narrative option is undoubtedly the multiplayer. Duking it out with friends that have piled up in the same living room has always been a selling point of the series, and this time around there are a number of awesome characters occupying the roster and competitive gameplay mechanics to keep things interesting. 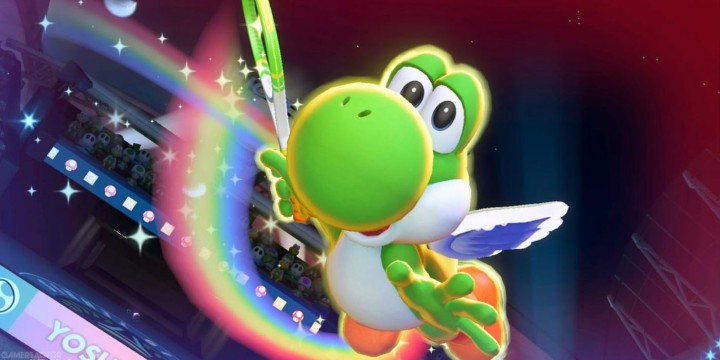 The biggest difference from a gameplay perspective is that players are now capable of breaking racquets, which can be done by utilizing a Star Shot technique. These will occur when a ball has been hit poorly by the opponent and the receiver has enough energy built up to enter a slow state,  allowing them to blast the tennis ball with pinpoint accuracy. Meanwhile, poorly timing a deflect of this absolute bomb of a shot will result in a damaged or broken sporting good. If a player runs out of racquets, they have no choice but to automatically forfeit the game. This is appropriately branded a K.O..

In terms of the roster, favourites like Waluigi and Yoshi can take on newcomers like Spike and even a freaking Chain Chomp. There are a good batch of Mushroom Kingdom athletes at fans’ disposal, but Nintendo has some longterm plans in place in order to ensure that this list of playable characters keeps growing. Koopa Troopa, Blooper, Birdo, Diddy Kong, and Koopa Paratroopa are all set to arrive free of charge over the coming months, with those participating in online tournaments gaining the ability to unlock them ahead of time.

Unfortunately, online wasn’t available at the time of this review. The current plan is to revise this piece with impressions after the mode does go live for the launch of Mario Tennis Aces. For now, however, the prospect of duking it out against other players around the world to earn characters ahead of their intended release is a tantalizing one that will keep fans engaged well into the year.

Mario Tennis Aces is exactly what fans have wanted from the series. It’s true that the single-player content may not be as bulky as some had hoped, but the almost fighting game-like level of gameplay depth, alongside the currently set stream of free content, ensures that Switch owners will have something to keep playing for months to come.

Hey, guess what? Riley is on Twitter at @TheRileyLittle. So feel free to bug him there.