Directed by 31-year old Ryan Coogler (Creed, Fruitvale Station), Black Panther is the latest offering in the Marvel Cinematic Universe, a franchise that dates back to 2008’s Iron Man. Now, ten years later, Coogler has given audiences the boldest – and best – entry in the Marvel canon thus far.

The titular superhero’s real name is T’Challa, portrayed here by Chadwick Boseman. He is the crown prince of the (fictional) African nation, Wakanda, which has masqueraded for millennia as one of the poorest countries in the world – when in reality, they are the most technologically advanced place on Earth. After his father – the king – died during the events of 2016’s Captain America: Civil War, T’Challa is preparing to ascend to the throne himself, during which he learns just what it means to be the leader of an entire country.

Sound familiar? That’s because it is – the overarching story itself doesn’t particularly break any new ground. T’Challa must balance his duties to his kingdom with his need to do the right thing, a beat seen countless times. Why, then, is this the best Marvel movie to date?

Ryan Coogler’s Black Panther takes that story, and makes it pop with the amazing cast (including the best Marvel villain ever), the wonderful world-building, the bright, diverse world of Wakanda, and then pairs it with a long look at what it means to be a person of colour – in this case, black – in a world that often overlooks or discards those who are a minority.

For more information on that subject, be sure to read about the evolution of the black superhero in film.

Boseman is joined by a veritable who’s who of the black acting community: Michael B. Jordan, Lupita Nyong’o, Danai Gurira, Letitia Wright, Forest Whitaker, Angela Bassett, Daniel Kaluuya, and Sterling K. Brown. They’re also joined by Martin Freeman and Andy Serkis, both reprising their roles from previous Marvel movies (Freeman from Civil War, and Serkis from 2015’s Age of Ultron). Boseman is great as the stoic T’Challa, pushed to his limits by a situation he could never have anticipated, but the film’s scene-stealer is easily Jordan as the villain, Erik ‘Killmonger’ Stephens.

Killmonger is perhaps one of the most complex villains to grace a Marvel movie, immediately joining – if not surpassing – Tom Hiddleston’s Loki and Michael Keaton’s Vulture. His motivations are simple: he wants to empower the downtrodden, impoverished black people all over the world. To him, Wakanda sits above, uncaring about the problems of black people elsewhere, when they could be doing so much more – especially for those communities around the globe. He’s not entirely wrong, either.

He is a perfect foil to T’Challa, who wants to do right by black people all over the world, but also wants to protect his nation. They mirror one another; Erik wants to destroy establishments, bring them crumbling down, while T’Challa wants to change them. He has a personal motivation as well, one that rocks every character personally, and it’s here where another strong facet of the movie – family – is shown. Erik’s history is inescapably linked with T’Challa’s own, and that drives events as much as anything else. 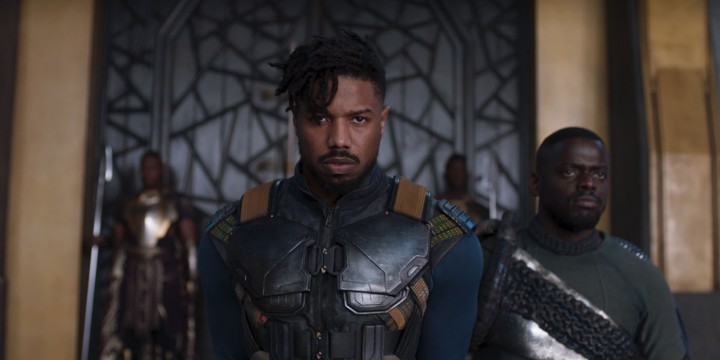 Another strength of this brilliant film are the strong female characters: Letitia Wright’s Shuri – T’Challa’s younger sister – is particularly fantastic as the tech genius who keeps Wakanda ahead of the rest of the world. Danai Gurira’s General Okoye and Lupita Nyong’o’s spy Nakia are also amazing, badass characters who push the action forward for most of the movie. Every character, from the supporting cast to the villain, is fleshed out – they are truly real people with real motivations, and that only serves to deepen the viewing experience.

Wakanda itself, especially the scenes where the audience gets to walk with T’Challa down the bustling streets, comes to life in every shot. Every corner feels lived in, every citizen is doing something unique. It bursts with action, and while audiences only get a glimpse, it’s a refreshing change of pace from the drab streets of New York or the cold confines of alien spacecrafts.

The camera work cannot be ignored, either. The artful long shot in the South Korean underground casino, beginning with Gurira’s Okoye taking out five armed guards with her spear, is amazingly choreographed – even if it may utilize a bit of cinematic editing cheats. When Killmonger enters the throne room for the first time, the camera is upside-down, signifying his presence turning Wakandaa upside-down. Even when audiences meet him for the first time, he is a black character, standing amongst stolen African artifacts held in an English museum, the walls stark white. The visuals just drip with detail such as that – T’Challa’s coronation scene is another. Every one of the five tribes that comprise Wakanda are present, with their own unique, colourful garb, all inspired by real African clothing. Even T’Challa’s journey to another realm is brilliantly lit in shades of purple, blue, and white.

It’s worth mentioning that the Director of Photography, Rachel Morrison, has not only worked with Coogler before on 2013’s Fruitvale Station, but also on 2017’s Mudbound, for which she became the first ever female nominated for the Best Cinematography Academy Award – pretty amazing.

The soundtrack, curated by Kendrick Lamar, also makes itself known often – artists include SZA, The Weeknd, and Lamar himself. The music, by Ludwig Göransson, is also amazing, utilizing drums to great effect, swelling with every major scene from the waterfall coronation to the final battle between Killmonger and the Black Panther.

Even with all these brilliant details, Black Panther still manages to be more than the sum of its parts. While it is ‘just another comic book movie’, it is also fresh, well-told, and inspiring. It is a fantastic Marvel movie, yes, but it is also a fantastic movie in general.

Black Panther – and the vibrant nation of Wakanda – will make their return in Avengers: Infinity War, which hits theatres later this year on May 4th, 2018.

You can find Shoaib Alli on Twitter (@SNSAlli) for more thoughts about Black Panther, other films, games, and more.