Just about a week ago, Square Enix reminded the world that, yes, Kingdom Hearts III is still a thing and it is supposedly coming out sometime this year with an all-new trailer. This after seven months of almost complete radio silence from Square Enix’s official Kingdom Hearts social media channels about the game.

Sure, if you check the Kingdom Hearts Twitter account you’ll see plenty in the months between this trailer and the last one about the mobile offering and the many HD reboots and side stories, but when it comes to an actual numbered title information is few and far between.

Then again, that’s always been the MO of this franchise, and I think that’s part of the reason why people love it.

No matter how long the wait (it was first revealed at E3 2013) and no matter how convoluted the story (seriously, does anybody actually know what’s going on?) there’s just something special about Kingdom Hearts and the latest trailer does a great job of illustrating this.

While nowhere near as prominent as it’s been in the past, triple-A game development in general loves leaning on darker, edgier tones, with a colour palette to match.

This is even the case in Japanese role-playing games like Kingdom Hearts. Look at Nier: Automata, as fantastic as it is, its desolate world of broken machines and robots isn’t exactly inviting. Even Square Enix’s flagship franchise suffered from this with Final Fantasy XV. A beautiful game for sure, but with it so grounded in reality and it’s all-black clad protagonists it set that sombre tone that’s just all-too common.

Granted, when you’re using an IP like Disney it’s pretty easy to hit those notes, but mish-mashing Final Fantasy with Disney’s properties the way Square Enix has managed to do so is nothing short of genius. In Sora, franchise lead Tetsuya Nomura has created the perfect conduit for Square Enix’s sensibilities to interact with the world of Disney.

Take, for example, the scene in the trailer that first introduces the Monsters Inc. world with Boo constantly calling out Donald as Mike Wazowski. At the end of that little exchange Sora, in all his Hot Topic anime monster glory, adds a cheeky line that wouldn’t be misplaced had it come from other Disney protagonists like Aladdin or Simba. 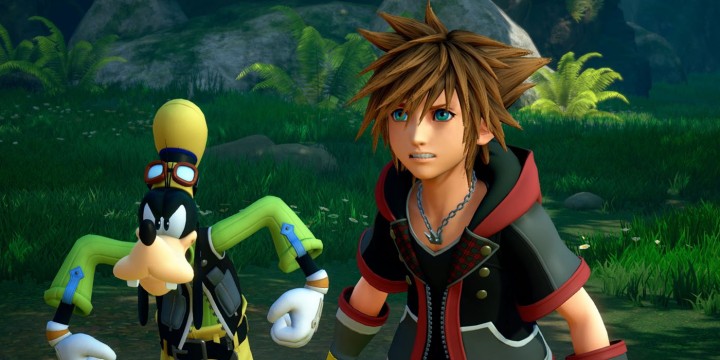 Even some of the new gameplay mechanics we’re seeing out of Kingdom Hearts 3 seems to want to fly in the face of gaming as we know it. By the looks of things, Sora will be able to transform his keyblade into all sorts of other weapons. In the trailer a new yo-yo weapon was unveiled that ended up transforming into a giant dog-like claptrap. Additionally, the trailer also showed Sora riding an inflatable balloon dog-thing that ended up exploding in a cavalcade of balloon animals called the wonder balloon.

So while the months – sometimes years – long waits for any sniff of an update about this strangely wonderful video game franchise can be excruciating, when they come with as much Technicolor and giant car key-like weapons as last week’s trailer does, it’s hard not to get excited.

As much as Kingdom Hearts seems to remain the same, it’s still just so damn unique.

Feel free to follow Steven Loung on Twitter (@loung_s) if you want to chat about Kingdom Hearts or anything else in gaming.