When Disney bought Lucasfilm back in 2012 for $4 billion (!), it brought a sense of renewal and cautious excitement to many Star Wars fans. After all, the prequels had not been well-received and the Expanded Universe was bloated beyond belief.

The same could be said for the video game arm of the company as well. LucasArts, as it was once called, had released The Force Unleashed II in 2010, the MMORPG The Old Republic in 2011, and….that’s it. Those two titles were passable, of course – but fans longed for a return to the era of Knights of the Old Republic, TIE Fighter, Jedi Knight, and countless others.

In that sense, it’s exciting that Jedi Fallen Order is so polished. It may not be joining the greatest hits of the Star Wars saga any time soon, but it is easily the best in-universe game to be released since Disney bought the license.

You play as Cal Kestis, a one-time Padawan who has been in hiding since the Jedi fell during the events of Order 66 at the end of the Clone Wars. Unfortunately for Cal, his identity is discovered, and he’s forced to flee – and confront a past he thought he had left behind.

Jedi Fallen Order is, more than anything else, a spiritual successor to the adventures of Kyle Katarn in the Jedi Knight series of games. It’s a platformer, first and foremost: you utilize Cal’s skill in the Force to overcome obstacles and puzzles on every planet, and the farther you progress, the more skills you unlock.

There are some frustrating aspects to the platforming, on occasion: Cal doesn’t always grab a rope or climbable surface on the first try – or even the second or third – causing him to fall to his death repeatedly. Thankfully, the fast load times alleviate this somewhat, but it can still break the immersion when Cal bonks his face on a rope instead of grabbing it, and then falls into a bottomless abyss for the fourth time. 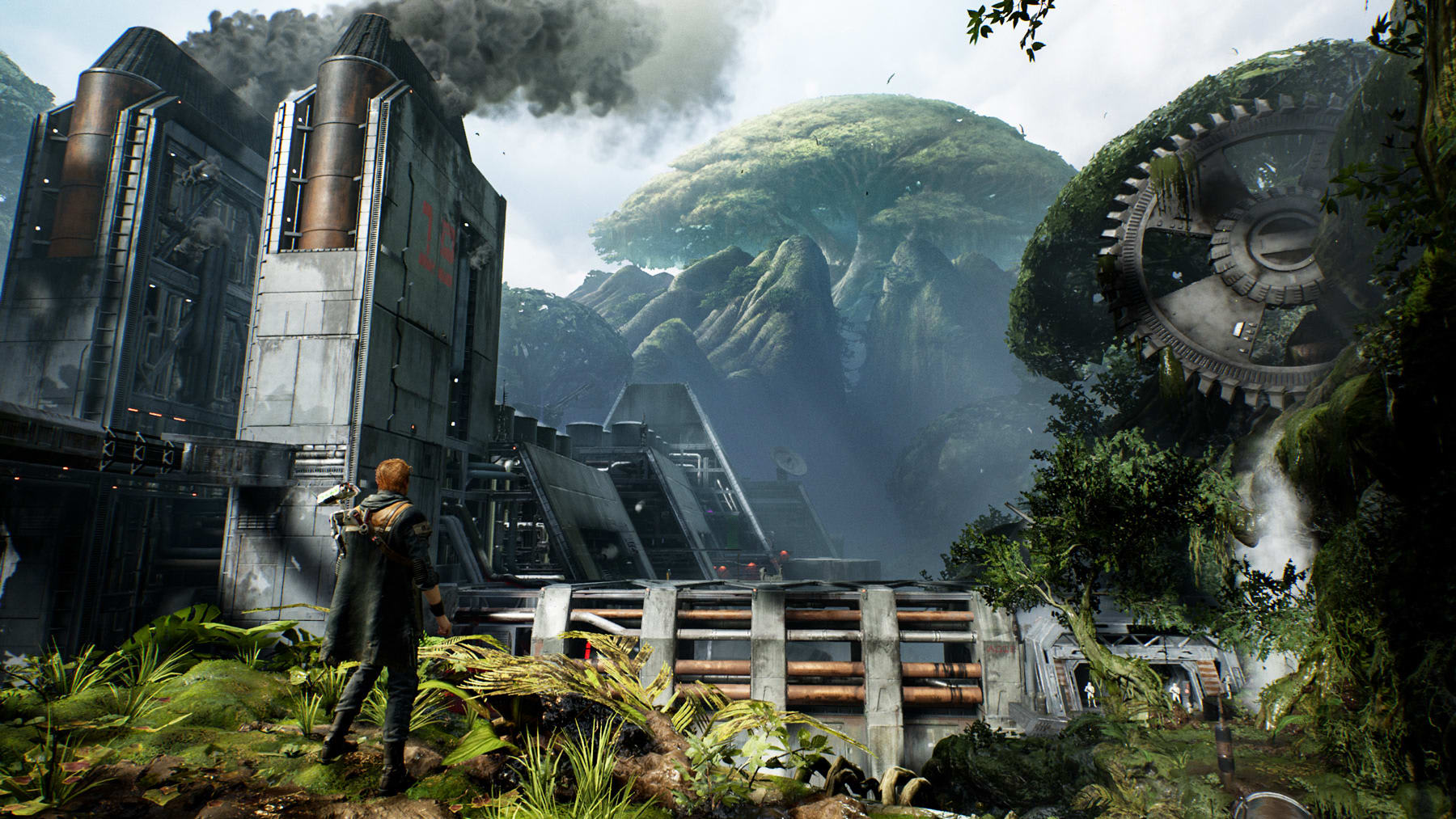 The best aspect of the game, by far, is the combat. It’s fluid and looks great, and the animations that Cal busts out when you’re wrapping up the defeat of the last enemy in a group are incredibly satisfying to watch. It’s a lot of fun to dive into a room full of Stormtroopers, and walk out with just a few scratches. The game puts heavy emphasis on parrying enemies in combat as well: as a result, it’s important to get that down pat right away. If you don’t, you’ll find yourself respawning early and often.

As fantastic as the combat is, the Force powers are a little disappointing by comparison. Story-wise, it actually makes sense: as Cal only was a Padawan at the time of Order 66, he never learned anything quite so advanced. Unfortunately for you, the player, that means over the course of the whole game, Cal only learns Force Push, Pull, and Slow, alongside the ability to double-jump. They can be used in a variety of ways, both in and out of combat, but for a game that looks as good as this, it’s a bit of a letdown to not be able to use the Force a little more.

For those who love collectibles, Jedi Fallen Order caters to you as well: there are crates littered around the worlds Cal visits, and with the assistance of his spunky droid BD-1, you’ll be looting to your heart’s content in no time. It’s all cosmetic upgrades, and nothing is left out: Cal’s outfits, BD-1, the Mantis (your ship), and even Cal’s lightsaber itself. You can swap out virtually every part of the saber, as well, and mix and match as much as needed (Note: There are also reports that some parts are from the Galaxy’s Edge theme parks located in California and Florida, so if you’ve been lucky enough to visit and build a lightsaber of your own, you can recreate it in-game, which is a nice touch).

Cal himself is also quite bland – I’m somewhat surprised that there are zero character choices when it comes to the protagonist. While I suspect the decision is likely cost-related, when it comes to playing around in a universe where people of colour and an unlimited supply of actual aliens are both present, it’s incredibly disappointing to be given yet another boring, white male. If that’s the ‘canon’ choice, that’s fine – but at least give players the choice to do what they want. If older games like Knights of the Old Republic (released in 2003) or Mass Effect (released in 2007) let you do it in any fashion, then a game made in 2019 can do the same thing as well.

In the end, the game hums right along from story beat to beat. While it does rely a little too much on backtracking once you’ve gained a new ability, it’s pretty enough to be pleasantly distracting every time you revisit an old locale. Even though it doesn’t necessarily do any one thing at an expert level, it does all of them at a decently high level. More than anything else, Jedi Fallen Order really does actually feel like a Star Wars game, and it’s a testament to how much the developers care about the universe that it feels as though they’re honouring everything at once: the original trilogies, the prequels, the Clone Wars, and even the now-classified Legends material.

It’s a good time to be a Star Wars fan, and chief among them is Jedi Fallen Order. If you can’t wait until the end of December, then this will more than tide you over until then.

Star Wars: Jedi Fallen Order is currently available on Xbox One and PlayStation 4.

You can catch Sho on Twitter at @SNSAlli if you have any questions about Star Wars, The Mandalorian (#TeamBabyYoda), or Fallen Order. He’s read all the books – yes, even the Mindharp of Sharu!