The Microsoft Theatre was buzzing with excitement on June 10th as members of the media were invited to a private event and go hands-on with some of the games that were announced during the Xbox E3 Briefing. There were several sessions hosted throughout the day with each session lasting 3 hours long; plenty of time to take some photos, interact with the development teams, and of course, get immersed in the latest gaming experiences. Some of the demos that were present included Gears 5 – Escape Mode, Age of Empires II – Definitive Edition, and the Forza Horizon 4 – LEGO Speed Champions Expansion with the life-sized LEGO McLaren Senna also in attendance. And to answer your question – you absolutely could sit in the driver’s seat and have your picture taken; I couldn’t resist.

Gaming stations were set up all around the auditorium with minimal line ups at the start of the session, so I tried my best to get through as many of the demos as I possibly could before my time had expired.

Here’s what I found:

The latest DLC for Forza Horizon 4 brings the humour of the LEGO universe to the high-octane world of the popular racing franchise. It plays and feels exactly like a Forza game but with the addition of a beautifully crafted world made up entirely of LEGO Bricks; there are even small piles of them scattered around the world that’ll slow your vehicle down if you collide with them – at least it’s better than stepping on them. The demo offered the choice of playing either on a traditional console (with a controller) or the driving simulator complete with steering wheel and pedals – of course, I took the simulator for a spin!

The expansion will be available on June 13th and I highly recommend picking it up; whether you’re a racing fan or a LEGO fan, everything is awesome with this DLC – don’t miss it!

I was eager to try out Escape Mode, the newest multiplayer mode coming to Gears 5 because it seemed rather simple and something that I could easily do by myself or with a squad; it’s not as easy as it sounds. With a limited supply of ammo, waves of enemy Locust blocking your path, and a deadly toxin following close behind, communication and co-operation will be the keys to success. My squad and I were able to make it to the first checkpoint without much difficulty, but things quickly changed en route to the exit as we were quickly picked off one by one, with the Locust dragging us away; they move quickly too. Before we knew it, we were all on the ground with no hope of revival – so close.

Think you have what it takes to escape the Hive? Find out when Gears 5 launches on September 10th, 2019.

The Borderlands 3 demo didn’t offer up any surprises as it was the same mission that Gearbox showcased during their official gameplay reveal a few weeks ago; battling Mouthpiece. It was a little disappointing but I still had a lot of fun with it and can’t wait to play the full game when it releases on September 13th, 2019.

Don’t forget to download The Commander Lilith & The Fight for Sanctuary DLC (must have either Borderlands 2 or The Handsome Collection) to help tide you over until the release date – did I mention that it’s FREE?

I have so many fond memories of playing Age of Empires as a child that the minute I started the demo for Age of Empires II – Definitive Edition, it felt like I was 10 years old again! The game plays exactly like it did back in the day – albeit with much better graphics and sound, but the core experience was exactly the same. In this play session, the towns were already developed and the main objective was to conquer as many of the opposing civilizations before the allotted time had expired. Quickly, I selected all of my troops and sent them out into the fog – taking out any enemy soldiers that crossed my path and training more to replace those that had fallen in battle. Before I knew it, the clock had struck zero and I was victorious in my efforts to conquer the land – I was tempted to play the demo again because I had so much fun with it.

Mark your calendars, because Age of Empires II – Definitive Edition will conquer your PC this fall and the Open Beta is starting soon on Steam. Visit www.ageofempires.com for more info and to get yourself registered for battle.

Sea of Thieves – The Arena

One of the things that I love about Sea of Thieves is its unique ability to quickly turn complete strangers into friends and crewmates. The Arena is one of the newest additions to the high seas adventure game that sees players go Galleon to Galleon against opposing pirate crews in classic PVP style. You don’t have to be the most notorious pirate or the most skilled, but with good communication, you’ll be swimming in loads of treasure; just be prepared to defend your booty!

I joined a session already in progress and was welcomed with open arms to their crew and together, on our majestic blue Galleon, we looted an entire island of all its treasure and engaged in an epic battle with an opposing pirate crew. Unfortunately, that’s where our tale ended – our ship was boarded shortly after and sank to the bottom of the sea. It was a great session and we shared a lot of laughs in the process.

Sea of Thieves is available now on Xbox One and players can earn a Spartan Ship Set to customize their ships with Halo inspired gear by playing the game anytime between June 10th – June 15th. 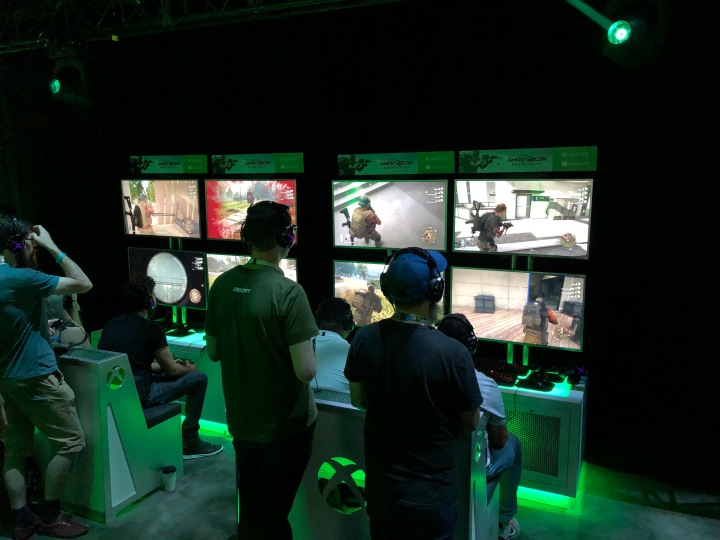 I couldn’t leave the building without getting my hands on Ghost Recon: Breakpoint and I was not disappointed. From start to finish, the entire session took about 20 minutes to complete and consisted of a squad of three, with a member of the development team taking the fourth slot. They acted as our guide and provided us with tips on how to navigate the environment and work together as a squad to complete the objectives. Each member of our squad selected a class that best matched their particular playstyle – myself taking the role of Sniper as I always prefer to stay hidden and take my enemies out from a distance rather than running into a firefight. Communication is very important and the game’s tagging feature allows squad members to highlight enemies for easy and co-ordinated eliminations, while the Drone acts as another set of eyes in the sky – be careful not to fly too close to enemy soldiers – they’ll know something isn’t right and become very suspicious. The terrain itself can be dangerous as running too fast down a slope causes you to lose control and inflict more damage; slow and steady wins the race. The demo concluded with a firefight around a technology research centre and our coordinated attacks and excellent communication skills enabled us to successfully complete the mission.

The Xbox E3 2019 Showcase Event was an incredible experience that provided guests with an opportunity to go hands-on with the latest games and add-ons coming soon to Xbox One.

You can find Chris on Twitter @cmzaiser for plenty of additional updates right from the E3 2019 show floor!