The Nintendo Switch is no stranger to re-releases. The success of these titles is often determined by whether the transition to the hybrid-console makes sense. With that in mind, the re-release of 2009’s WiiWare cult hit Swords & Soldiers feels like more than just a rushed port. Thanks to some clever tweaks that make it feel at home, it captures the charm of the original while filling a void on the platform’s growing catalogue.

Real-time strategy games have historically struggled to find their place on home consoles. The biggest hurdle is adapting the frantic micro-management from a mouse and keyboard to a typical console controller. Without the precision and speed of a mouse, console RTS games can have the player fighting the controls as much as fighting their enemy’s army. Swords & Soldiers solves this dilemma by finding the balance between simplifying the controls while not sacrificing the depth of gameplay.

Rather then viewing the battlefield from a top-down perspective (ala StarCraft), the conflict takes place on a 2D plane. All units automatically move in a single direction as they try to reach the opponent’s base and destroy it. This simple reimagining of the genre frees up the player from having to micro-manage every single unit. Instead, the player can turn their focus on planning which combination of units and spells can best counter their opponent.

There are three impressively different factions, each with their own 10-mission campaigns. The Vikings, the Aztec, and the Chinese are all equally fun to play with and are shockingly balanced. For example all three have a tower-type unit, but while the Vikings tower is vacant until an axe-thrower reaches it, the Chinese Buddha statue only increases mana regeneration. The Aztec’s ultimate spell sends a giant boulder from one end to the other, crushing everything in its path unless the player can time a jump so the boulder avoids friendly units. Alternatively, the Vikings ultimate spell sends Thor’s hammer from the sky, doing major damage to enemy units before becoming a tower that shoots lightning. Every tactic has a counter, and discovering how your faction can respond to a threat is a rewarding experience.

The controls adapt depending on how you are using the Switch. While docked, the units and spells are mapped to the two triggers. Press either trigger and the wheel expands, then selections are made with the joystick and the A button. It works, but I am confused why more units are not mapped to a single button when there are so many unused. The Wii original used pointer controls flawlessly, and that experience is better replicated with the touch screen controls. Using just one finger to send units and perfectly place spells is easily the best way to play. The Switch version lives up to its console’s promise, seamlessly switching between control options. Touch the screen in the middle of a level and the controls instantly switch; press down a trigger and the game recognizes the new control scheme.

The amount of content is staggering. In addition to a campaign for each faction there is also a bonus fourth campaign that was unreleased in the original Wii version. The story is nonsense, but the writing is sharp and the art-style lends itself to a charming tale that is sure to cause a few chuckles. But the meat of the game is in the challenges. 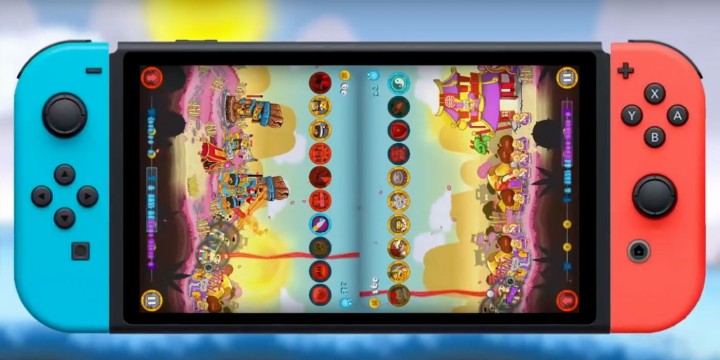 “Survival” pits you against endless waves of enemies across all three factions. Hardcore players will enjoy the tough test and a great measuring tool to see which faction is your best. “Berserker Run” has you escorting a single unit across a huge map using only spells. You start with only two spells, and every milestone you need to select one of two additional spells to add to your arsenal. It is a clever shakeup of the traditional gameplay loop, and something you see applied to a handful of campaign levels as well. Lastly there is “Boulder” and “Boulder XL”, a simple mini-game that has you mastering the Aztec ultimate. The goal is to crush all 100 enemy units without hitting a single friendly one. Though the least compelling of the bunch, it is a nice addition that adds even more variety.

Multiplayer is at the core of the RTS genre. Local multiplayer can be played while docked, but of course you are restricted to the button mapping which is less than ideal. To make up for it, a brilliant handheld multiplayer was added that changes the orientation to a vertical screen. The playfield is small but works surprising well on smaller maps. However, the absence of online or even local two-console multiplayer is shocking. In 2009 this was acceptable, but after nearly 10 years and six rereleases later it is fair that players expect the option to test their talents online.

Despite the multiplayer woes, it is hard not to love what is there. The sequel “Swords & Soldiers II Shawarmageddon” is scheduled to release on March 1 and promises online multiplayer, but for those that can’t wait to control entire armies at their finger tips Swords & Soldiers is worth the price of admission.

You can catch Mark Staniusz on Twitter at the aptly branded @MarkStaniusz handle. Be sure to tell him about how cool games are or maybe talk about sports. Whatever floats your boat, really.