Over the last ten years or so, we’ve seen a shift in genres – as always, of course. Thrillers seem to have decreased in popularity in favour of horror, and superhero movies have exploded to a level of saturation never before seen in Hollywood.

Another genre has also sharply increased over time, one we’ll refer to as ‘old man action’ (Vulture’s Matt Patches entertainingly calls it ‘geri-action‘, which I can get behind). Remember 2008’s Taken, with Liam Neeson? Since then, Taken has gotten two sequels, and movie-goers everywhere have also been given The Expendables, The Equalizer, The Equalizer 2, RED, RED 2, and several Mission: Impossible movies. Neeson himself has also added to the repertoire, making Non-Stop, A Walk Among The Tombstones, Run All Night, and The Commuter all on his own. Even Keanu Reeves has found success with the John Wick franchise, of which the third installment is being released later this year.

Since the world apparently needs more of these, enter Mads Mikkelsen’s newest Netflix movie, Polar. Mikkelsen’s Duncan Vizla is the world’s top assassin, who is preparing for retirement as well as can be expected – until some of his former co-workers come calling. The plot is pretty bare bones: if employees of this agency are to die before their 50th birthday (at which age they are forced into retirement), their hefty pension goes back to the company, so the firm’s head honcho, Mr. Blut (Matt Lucas) sends his young guns to collect – by any means necessary.

It’s a pretty stylish film – lots of long, drawn out shots, beautiful locales, and moody lighting. Oddly, the movie is almost split in two: there’s Duncan going about his business as he gets to know his new neighbour, Camille (Vanessa Hudgens), and the other half is Blut’s young team of mercenaries who are searching for Duncan all across America. Any time Duncan is on screen either by himself or with Camille, the movie is almost chillingly silent – plenty of black and white. When the team of assassins are on screen, it’s loud, boisterous, and strangely colour saturated (to the point their skin tones look almost alien). 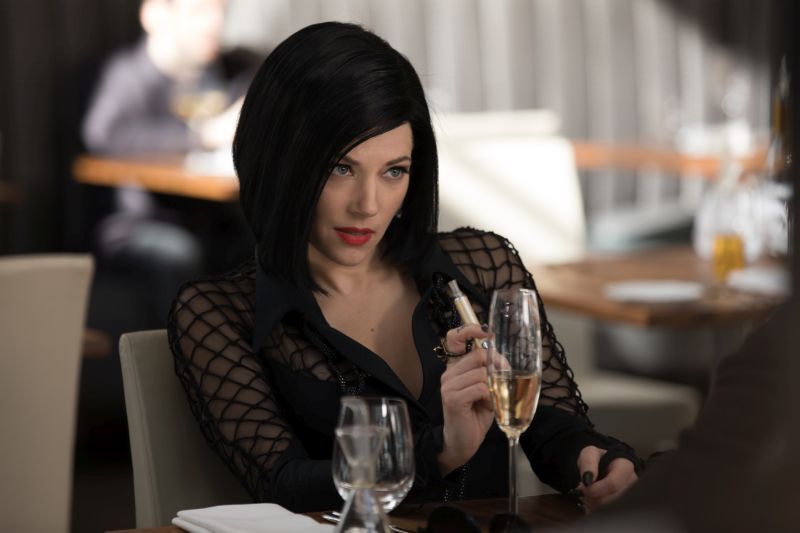 Speaking of the team of hired guns – they’re all there to fulfill some kind of action stereotype. There’s the sexy one, the scrawny one, the big one, and…another one? Truth be told, the movie shoots their names towards you via title cards, and I still can’t really remember what they’re called.

The film goes hard after the ultra-violent, pornographic angle very often, including two explicit sex scenes, one of which is interrupted by a gun fight (best of both worlds!). It’s just all so unfortunate, because hidden underneath it all is an interesting story about Duncan’s life, his previous missions (of which we get but a glimpse), and the characters he knew once upon a time. While the filmmakers were clearly going for a John Wick vibe, which so effectively captured audience’s attention the world over, Polar is more like 2006’s Smokin’ Aces, which….didn’t. It was a campy, poorly-acted flash in the pan; wait, which film am I talking about again? I honestly don’t remember. Mads Mikkelsen is truly wasted in this film – his dark comedic timing shines pretty brightly through at times, and those are easily the highlights of the whole proceedings. It’s just that everything else really bogs it down, whether it’s the poor acting from essentially everyone not named Mikkelsen or Hudgens, or the lack of truly cool action sequences. There are really only two standout set pieces, and one of them is in the trailer!

In the end, Polar smacks of Netflix trying to cash in on the ‘old man action’ market, except they had the idea ten years too late. If this movie had come out the year after Smokin’ Aces, then it’d probably be everyone’s favourite movie for a couple of months. Save yourself the time on this one, and just go watch the trailer for John Wick 3 again. It’s more fun.