Franchise Mode is for gamers interested in the long haul: those who want to see the Cleveland Browns remember what wins are; and those who want to mold a successor that can break all of Tom Brady’s records. EA Tiburon has made several new changes in Madden NFL 19‘s Franchise Mode with a strong focus on broader-based player archetypes and increased shareability of one’s accomplishments – and nothing is more satisfying in that regard than creating a dynasty of gridiron warriors collecting Super Bowl rings like candy.

Here, Madden NFL 19 Producer Ben Haumiller has one key motto for this year’s evolution of the game mode: strengthen your strategy. This concept is echoed many times in the adjustments EA Tiburon has made to Franchise Mode, and it starts with the basics in terms of player progression.

When Franchise Mode players accumulate enough experience to increase their ratings, veteran Madden NFL fans will notice a simplified system that no longer has them adjusting individual skill ratings. When a player goes up a skill point in NFL 19, players just select which archetype (e.g. scrambler, strong arm, field general, west coast) to progress – for example, adding +1 to the field general archetype increases the player’s awareness by two, and their deep and short throwing accuracy by one. It’s a subtle move, but it makes the game a lot more accessible to those who either didn’t want to spend time micromanaging their player ratings, or those who simply didn’t know how to do this effectively. 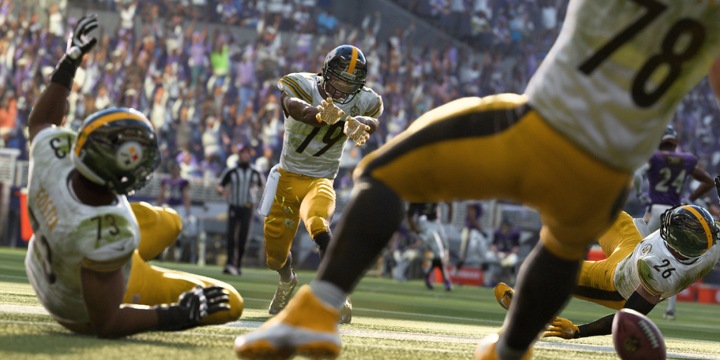 Another evolution of an existing Madden mechanic is scheme fits, which Haumiller indicates will now mean a lot more than they did previously. Each scheme has a preferred positional archetype for each position group, and each position group will have 4 archetypes. It’ll force players to think about if they should change their scheme to fit the team, or adjust the team to fit the scheme they want. Beyond that, a good roster composition that fits the team scheme will have a big bonus: a player with a good scheme fit gains extra XP per week to increase their rating faster, a bonus that can’t be overlooked over long bouts of Franchise Mode.

Madden NFL 19 will also allow players to edit all 450 players in each draft class, ranging from every single trait, every single rating, and every single name. These can then be shared to the community for others to download, or kept private. This ties into the game’s emphasis on shareability, with things like Draft Day having a much simpler screen to encourage players to share their picks. Haumiller says EA Tiburon wanted to get out of Franchise Mode being known for being ‘just UI and spreadsheets’, and gamers will notice the studio’s effort into reducing such displays throughout the mode. Images taken from the game will also be paced in the manager’s hub and loading screens, adding a nice cosmetic touch.

Prior Franchise Mode playthroughs only had one Captain’s Patch that was applied automatically. In Madden NFL 19, the authentic patch now gains additional stars before turning gold to show the Captain’s progress, mimicking what actually goes down long term on the gridiron. Franchise Mode will also use a star icon to indicate who’s the captain on opposing teams, since they often tend to be the most talented player who gamers may want to sign. 8 years into Franchise Mode, it can be pretty handy to have a quick visual indicator on who to watch out for.

EA Tiburon has also adjusted the developmental trait of players to be more dynamic. This trait dictates how much XP players earn per game and, thus, impacts their growth as a player. A player’s developmental trait comes in four modes (normal, quick, star, and superstar) with superstar players (especially rookies) being rarer than ever before. Players are now evaluated at the end of a season based on how they did compared to everyone else, so even superstar’s will need to perform at a consistently high level in order climb their way into the hall of fame.

Of course, as the years wind on time will take its toll on all players. EA Tiburon had adjusted the regression system for NFL 19, which impacts how aging players regress near the end of their careers. Each rating has a unique chance of going down at the end of a season, though high development players trait players will regress at a slower pace than others.

As an added bonus to this year’s franchise mode, players who complete the Longshot 2 storyline will be able to import Devin Wade directly into their franchise. Haumiller says that the choices players make throughout Longshot 2 will dictate what type of player Wade ends up being, which will impact his initial ratings.

This year’s franchise mode has had no shortage of refinement from EA Tiburon, and the changes feel like they’ve left a largely positive impact. Players will find simplified and time-saving adjustments for the moments when they’re not on the field, and everything that does occur on the gridiron has a much bigger impact on players as years tick by. The stakes of each play seem much higher than before, and Haumiller’s early advice seems to ring true throughout each change: players will certainly have to strengthen their strategy to survive in Franchise Mode this year.

You can find John on Twitter at @Makelevi, where sometimes he talks about sports. Which sports? Only one way to find out.