With the advent of the Disney-led Star Wars movies, audiences were promised more entries into the lucrative saga that we all know and love. However, those same audiences were seemingly disappointed  to learn that, after the success of 2016’s Rogue One, the next standalone adventure was backstory for the scruffiest looking nerf herder this side of Coruscant, Han Solo.

It’s been a strange ride to theatres for Solo: A Star Wars Story, including rumours of acting coaches and ending with a directorial change. It’s a good thing, then, that the movie itself is loads of fun, action-packed, and pretty deftly colours in the relationships that Han makes with some of the saga’s most famously enduring characters.

Alden Ehrenreich may not look like Harrison Ford, but he brings an undeniable charm to the role, which was the only real essential part of embodying the famous smuggler. The arrogance combined with the earnestness is great, and makes for a lot of fun interplay with the other actors. Donald Glover is brilliant as Lando Calrissian, and steals a lot of scenes he’s in – he even has a closet dedicated to capes. Woody Harrelson appears as Beckett, the scoundrel who teaches Han his ways, and is a lot of fun as his one-time mentor. Joonas Suotamo returns as Chewbacca, after he inherited the role from original Wookiee Peter Mayhew (who is 74 with a pair of bad knees) for The Force Awakens and The Last Jedi.

Not only is it action-packed, but it is chockful of references to the old Expanded Universe, leaving creative Easter eggs for fans to find. For example, Lando mentions his adventures in other parts of the galaxy, name-dropping Sharu and Star Caves – those are pulled from L. Neil Smith’s 1983 novels Lando Calrissian and the Mindharp of Sharu and Lando Calrissian and the Starcave of ThonBoka. There’s a host of others as well – we hear about the Imperial Academy on Carida (mentioned in Kevin J. Anderson’s 1994 Jedi Academy trilogy), while Emilia Clarke’s Qi’Ra knows the martial art of Teras Kasi, a fighting style most famously known from the first ever PlayStation Star Wars game, Masters of Teras Kasi, released in 1997.

Some other in-canon references include Beckett wearing an outfit later seen in Return of the Jedi, and there’s even a blink-and-you’ll-miss-it cameo from Ford himself – he’s only on-screen for perhaps two, three frames, so quick it’s easy to not even realize it took place. It’s quite cleverly added in, and was a nice way for the franchise to tip its cap to not just one of Hollywood’s most famous stars, but someone so beloved by Star Wars fans all around.

Solo is far from perfect: the biggest sin is that it intentionally sidelines more or less every major female character. Qi’Ra is given the most screen time, but even after we (vaguely) learn about the struggles she endured while apart from Han, as soon as she’s united with him, almost every action she takes and scene she’s in has to do with their relationship. Thandie Newton, the other relatively large Hollywood actress cast, is cast aside about 30 minutes in – it’s easy to forget she’s in the movie at all. 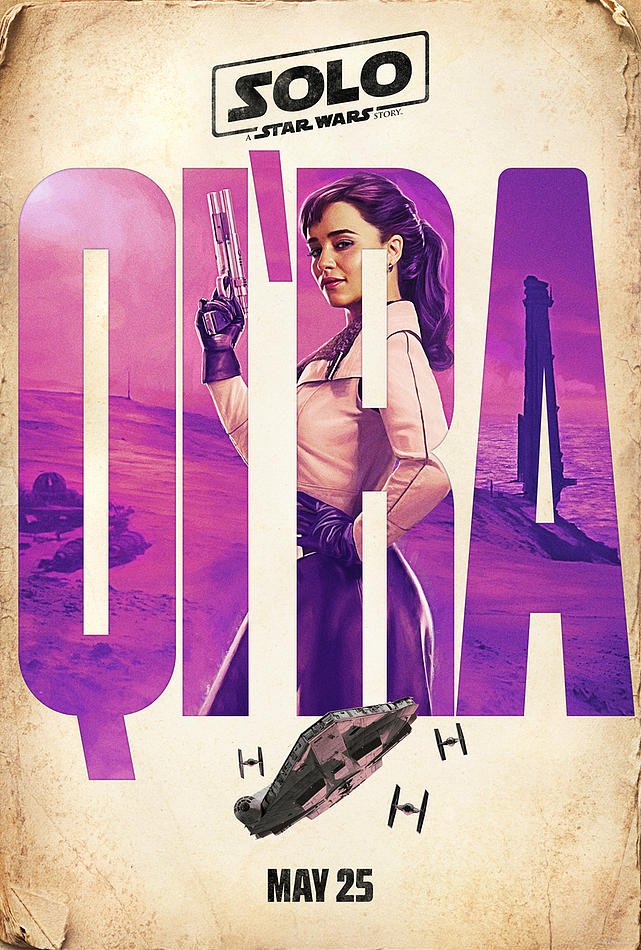 Phoebe Waller-Bridge is the female-voiced droid L3-37, and even though she is probably one of the most interesting Star Wars characters to come to the big screen since Disney acquired the franchise, she too is set aside about halfway in. Erin Kellyman, whose character actually accomplishes something of note, is only truly introduced in the film with about 20 minutes to go.

The other major problem is simply that it’s a prequel – whenever we see Han, Chewie, or Lando rush headlong into battle, we know nothing bad happens to them. We know they don’t lose any appendages, or are permanently hurt in any way, we know Han ends up with the Millenium Falcon, we know all of these things, and so it robs a lot of the dramatic action scenes of meaning. Director Ron Howard seemed to thankfully realize this, so he often either quickly glosses over it, or includes a new character like Qi’Ra, L3, or Beckett to raise the stakes a little.

Solo: A Star Wars Story is a fun ride, with colourful characters, visually interesting locales, and is action-packed at almost every turn – even if it does have to overcome the formulaic ‘connect tab A to piece B’ that most origin stories have to go through at some point.

Even so, given that the galaxy far, far away is going to be getting a new entry almost every year for the foreseeable future, if this is what they’ll be like, then sign me up.

Solo: A Star Wars Story is currently playing in theatres.

If you’re game, you can find Shoaib Alli on Twitter at @SNSAlli where he often talks about films. He’ll probably tweet out this review, for example. There really are just so many possibilities.

2 thoughts on “Solo: A Star Wars Story – A Worthwhile Origin Story That Adds to the Legend”