I’m not the most talkative individual on Xbox Live when it comes to conversing with strangers. Truth be told, I have a core group of friends that I play competitive games like Tom Clancy’s Rainbow Six Siege with on a weekly basis – and every so often we change up the title we play to add a little variety to the mix – but we rarely venture outside of a private party chat during these endeavours. It’s proven to be a good setup thus far, so when closed beta codes for Sea of Thieves landed in my inbox, I knew that my friends and I were in for a real treat.

The first few sessions with Sea of Thieves saw us keep within the familiarity of party chat, allowing us to make our own fun through in-game shenanigans that often involved inhaling grog, locking each other in the brig, playing instruments at inappropriate times, and firing one another out of cannons. It was an incredible amount of fun, but there eventually came a time when all of us failed to find time to log on together – and so myself and one other buddy queued up for a 4-person venture.

We couldn’t have known what we were in for.

As we paired up with two other players, we felt it would be best if we communicated with them utilizing the game’s built-in chat. We were fortunate enough to get matched with some like-minded and competent individuals that were as content with goofing around as they were about picking up quests and gathering treasure. We familiarized ourselves with the two new members of our crew, selected a mission, and set sail on what would soon be one of the more memorable adventures I’ve ever had in a video game.

We had gathered a few treasure chests before encountering our first group of hostile players. Two ships sailing in tandem came up over tides on the North-Western horizon. As we approached the vessels, I quickly came to the realization that we could hear the other players speaking. As we bantered back and forth, I realized that this ability presented a few immediate and strategic options: 1) It became evident that their alliance was rocky at best; and 2) they couldn’t tell which of us were allies and which were foes because every non-crew member on their galleon lacked their name in green text (an indicator of immediate crew members).

Boarding their boat, I fit right in as they continued to open fire on my ship. I strolled past those manning the cannons and climbed up to the crow’s nest before opening fire on the unsuspecting players below. Realizing they were being shot on their own ship, they began to attack the other players – forcing the smaller crew to turn tail and sail away while shouting expletives at the same people they had hoped to befriend. 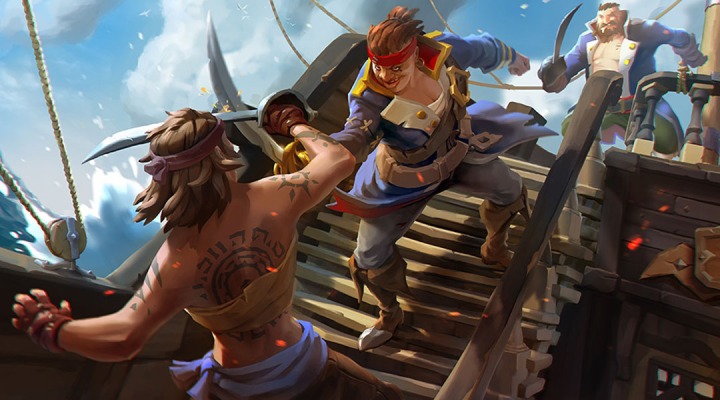 I was eventually murdered by the less-than-happy pirates, but I’d come to terms with a core aspect of the game. So, when we came across a two-person boat with two individuals claiming that they had wanted “to be friends,” we responded by laughing as we rammed their boat, fired off a few cannon balls into their hull, and eventually sunk the vessel. With nowhere to go, they swam up to our boat (narrowly avoiding ravenous sharks) and we began chatting with them.

After a few songs on the accordion and a sincere desire to team up with other players expressed, they had unofficially joined our crew.

We played alongside these stowaways for several hours, as they helped us gather supplies, bail out water we were taking on, and board up any holes we received from enemy cannon balls or accidental collisions with a treasure-filled island. We began becoming protective of the duo by having them hide underneath the deck during an enemy encounter, and we even set up plans to rendezvous at another island on the map if death ever did separate us.

Eventually, our time together was coming to an end and we decided it would be best if we parted ways for the evening, but not before adding each other to our respective friend lists. We said goodbye to one another and agreed that we’d have to play Sea of Thieves again once it arrived later this March. We haven’t spoken again since, but I remain optimistic that we’ll be able to set sail as a pirate crew again.

Still, all of this happened because Rare wanted to make a game where happenstance rules supreme. The sandbox design of the beta allowed us to make our own fun and to have real interactions with others that just wanted to explore the world alongside us. The ability to chat with anyone opens the doors to these genuine human experiences. Even when others would rather take your treasure and leave you for dead, there are still others out there that would rather help than hinder.

With Sea of Thieves being the first game available at launch through Microsoft’s revised Xbox Game Pass program, it’s becoming more and more affordable for gamers to jump in on experiences like this right from the beginning. Hopefully the price point means the entirety of my crew (official and unofficial) will be back on the deck of my in-game ship sooner rather than later, as we set off to find even more scallywags to make similar memories with.

Sea of Thieves arrives exclusively for Windows PC and Xbox One on March 20, 2018.